Trying to time your closing is a fool's errand

All too often and sometimes against my best counsel, buyers and sellers will try to time the closing to a specific day. As the title states, that really is a fool's errand. I wrote a post right here own this blog back in 2020 that sums it up well:

"All too often I find buyers and sellers trying to line everything up for the perfect close and move. Real estate transactions have lots of moving parts, seriously, internal combustion engine levels of moving parts! Trying to time everything perfectly with a train of buyers and sellers all lined up like the proverbial dominoes, is like herding cats.

I have mentioned this before and it is worth mentioning again. Buyers do not try to time your closing with your move out date for perfect alignment. That is a recipe for drama. You have a seller who is moving and often waiting on another seller at the other end who is waiting on a seller, etc. Pay a few bucks extra rent and give yourself a two week cushion. It's the best money you ever spend because now you are moving slowly rather than in a rush. Even in the best case scenario with the "perfect timing" approach you end up damaging your current apartment/house and or breaking your valuables because you are in a hurry. The worst case scenario is that you have movers show up but your seller can get out! Save yourself the heartache buy giving yourself a two week cushion. You'll thank me later :)"

In the situations where multiple parties have transactions up or down the chain the number of moving parts multiplies making a percent timing situation that much more complicated and unlikely. We all have enough drama in our lives don't we? The wise person gives themselves and other a cushion to ensure a smooth and happy close.

Is the era of large homes over?

Many countries in the world are failing to reproduce at replacement level. Russia and China are notable examples. The United States has fallen to the lowest birth rates in our history now below replacement levels at 1.7 births per female with 2.1 the standard measure for replacement. Many young adults are foregoing the family experience and those that do decide to have a family are often sticking to just one or two children. Since this is a real estate site I'll skip the economic issues and implications of a falling population. I do believe however this trend will lead to lower demand for large homes.

Builders like to have large homes as they tend to be more profitable, This is especially true of two story homes which have a larger living area with a smaller footprint on the lot. The notion of a five bedroom house was once commonplace but these days families with one or two kids are not really looking for that many bedrooms. Builders will adapt, we can bet on that.

Over the last several years I have noticed that the price differential on resale homes between large four plus bedroom homes and smaller ranch style three bed homes has gotten very tight. A nice mid-grade remodeled 1990s five bedroom 2500 square foot home in East Vancouver might get $600,000 in the current market, but a similar 1990s mid grade home in the same neighborhood with 1400 square feet and three beds will fetch $500,000. Think about that for a second, the smaller house has 56% of the living space but costs 86% of the price of the larger house.

There has always been a price per foot increase on smaller houses built on similar lots due to the fixed land and development costs. But the gap has tightened much more these days. Smaller homes used to be mostly in demand by first time buyers and older people downsizing. Now these small homes are also acting as move up homes for the older millennials coming from a townhouse, condo, or apartment. The pressure on the classic three bed, two bath ranch is greater than ever.

Many builders locally are capitalizing on a growing population and a sizable number of out of area buyers to keep our local housing market going. But these builders are still building a lot of large 3000 SF homes with 4-5 bedrooms. That market may dry up here in the next year or two. The future seems to point to smaller homes with upscale models attracting a "move up" market as well as basic simple homes at more affordable pricing for first time buyers. Townhomes are also a rising star among the new downsized American family.

Sellers looking to sell a large older resale home should anticipate downward pressure on pricing over ht next few years even if the general market is advancing. After decades of housing size increases were are starting to see some shrinkage. The era of large homes may not be entirely over, but it is about to become a bit inventory bloated in the market.

This article was originally published by 'Urban Living in the Couv' 10/3/2022 by Rod Sager.

How’s that for a click bait title? Well it is true at least from a monthly payment point of view. One of the biggest hurdles that condominiums and to a lesser extent townhouses have to overcome is the HOA dues each month. Lenders require that the borrower qualify not only for the PITI (principle, interest, taxes, insurance) payment, but also the HOA dues. This means that the borrower has to qualify for much more than just the purchase price. When interest rates are low the HOA dues become a relatively high portion of that payment, but as they rise the cost of the monthly payment rises not the HOA dues, thus the HOA dues become a lesser percentage of the whole.

Here is an example. Back a few years ago we saw mortgage rates dip into the 2’s for awhile. But let’s just use 4% as an example. We shall suppose a borrower is looking at a condo that is listed at $500,000 and 4% mortgage is available with 100k down, HOA dues are $500 a month, taxes $2500 a year, no mortgage insurance. The PITI payment would be roughly $2185 plus $500 for HOA making the total monthly burden $2685 per month. The borrower must qualify for this amount. This buyer is only buying a $500,000 property in this scenario but qualifies to buy $554,000 house without an HOA fee. Generally traditional houses lack an HOA but have higher property taxes and homeowners insurance cost, but that is still a big difference. Now fast forward to the present day with rates now tickling 8% and things look much different. The PITI payment plus the HOA fees on the condo, all else being equal is now $3643 per month. This translates to purchasing power of $535,000 on a property with no HOA. Again, bear in mind that taxes and insurance are less on condos than traditional property because the HOA is paying the taxes on the land and carries structural hazard insurance so that the condo owner only has to cover the inside of the unit against hazards. Now most HOAs cover some of the utility expenses as well with water and garbage being fairly common. Some type one construction towers have heating and cooling covered by the HOA as well. In these scenarios with interest rates above 7%, the condo can reach near parity with a traditional house when utility expenses are calculated in.

There are already many people that want a less bothersome ownership experience free of yard work, and general exterior maintenance. Now that rates are climbing, condos actually start to look like a value in the marketplace even with the HOA dues. A typical small suburban single family house in Vancouver has property taxes at $4500 annually versus a comparable priced condo at just $2000. Look at the chart below asterisks reference footnotes explaining the composite average: 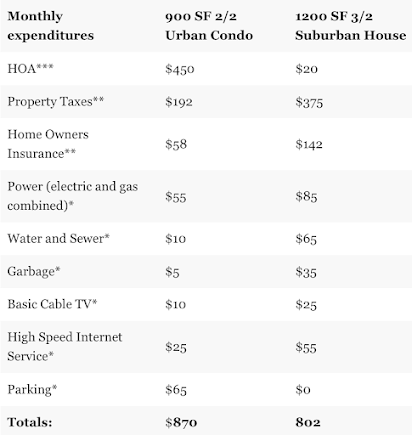 The real difference comes down to lifestyle. A condo will almost always have less chores and maintenance and a house will have more space and flexibility of use. Urban condos will nearly always have a more walkable neighborhood and be much less dependent on a car for daily activities. With rates now above the 50 year average the condo HOA fees are far less impactful than they were just one year ago.
Posted by Rod Sager at 10:49 AM No comments:

Email ThisBlogThis!Share to TwitterShare to FacebookShare to Pinterest
Older Posts Home
Subscribe to: Posts (Atom)
Relocating to Vancouver?
Urban Living in the 'Couv'
Retire to Washington