The Heights is Still a Great Area

Vancouver's Heights has been around for decades and it has remained a solid place to live. The Heights is actually a broad coalition of neighborhoods from the vintage upscale Dubois Park and South Cliff to the more modest areas such as Harney Heights and Northcrest. This area is also the focus of the next great redevelopment zone for the city, simply and aptly named "The Heights District."

This new district will include the entire Tower Mall area where MacArthur meets Mill Plain east ro Andresan. This will be a new urban center designed to create an effective center of town feel while maintaining the mostly suburban feel of the existing neighborhoods.

I wouldn't underestimate Vancouver's resolve on this. From the complete renovation of Esther Short, the bold Columbia Shores and the the shiny new Waterfront, Vancouver has been bring its 'A' game to the development of older areas. The existing neighborhoods offer a wide variety of opportunities from multi-million dollar mansions overlooking the Columbia to some classic Kaiser cottages from WWII. 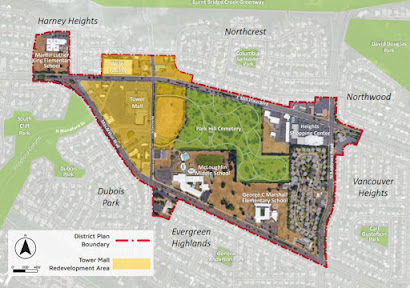 These classic neighborhoods invoke more emotions and charm than many modern developments that tend to strip out native vegetation in favor a more systematic approach to greenery. I like the "mature" neighborhoods with those shady tree line streets and private yards. Vancouver's Heights area covers many neighborhoods and thousands of homes so there is something for every one. And someday fairly soon there will be a new urban district for the Heights as well.
Posted by Rod Sager at 8:30 AM No comments:

Timing the Transaction is Doomed to Fail

How's that for click bait? All too often I find buyers and sellers trying to line everything up for the perfect close and move. Real estate transactions have lots of moving parts, seriously, internal combustion engine levels of moving parts! Trying to time everything perfectly with a train of buyers and sellers all lined up like the proverbial dominoes, is like herding cats.

I have mentioned this before and it is worth mentioning again. Buyers do not try to time your closing with your move out date for perfect alignment. That is a recipe for drama. You have a seller who is moving and often waiting on another seller at the other end who is waiting on a seller, etc. Pay a few bucks extra rent and give yourself a two week cushion. It's the best money you ever spend because now you are moving slowly rather than in a rush. Even in the best case scenario with the "perfect timing" approach you end up damaging your current apartment/house and or breaking your valuables because you are in a hurry. The worst case scenario is that you have movers show up but your seller can get out! Save yourself the heartache buy giving yourself a two week cushion. You'll thank me later :)

Interest rates remain low and buyers continue to enter the market where as sellers seem to be scarce. This has created a bit of a seller's market despite economic conditions that suggest otherwise. Buyers need to be prepared for multiple offers on well priced homes near or below the median price which is just shy of $400k locally.

Vancouver is an eclectic mix with something for everyone

Vancouver, USA is a place that has one of the most diverse residential real estate markets in the entire region. The city proper lies on the shores of the mighty Columbia River where nearly 200,000 people reside within the incorporated boundary. But Vancouver also has another 140,000 or so people living in urban and suburban neighborhoods just outside the official "city."

It is mostly in the unincorporated neighborhoods that one can find a suburban home on a large 1/2 acre or even 1 acre lot with a bit of a country feel yet still "in town" with close proximity to suburban amenities like schools and shopping. But these are also neighborhoods where one might notice some quasi rural effects such as livestock, roosters, and other traditional rural and farming type ambiance for better or worse.

At some point over the next decade or so, the city will annex most of these areas and when that happens some conformity changes will occur which in general helps the overall aesthetic, but may cripple some of the charm.

People moving in from out of the area are often taken by surprise at the "size" of Vancouver and that is likely because they expected a city the size of the Vancouver described on the Wikipedia page and found the Vancouver of reality which is nearly twice as big. Vancouver has a robust downtown that has become very urban over the last 25 years yet remains notably more navigable than Portland's busier urban core. One can find high-rise condos and waterfront apartments in modern walk-able and sustainable neighborhoods. Vancouver has a large area of vintage classic homes in Norman Rockwell type neighborhoods such as Arnada, Shumway, Hough and Carter Park. The city has a wide swath of neighborhoods with homes dating to every decade of the 20th century. Vancouver is like a time machine of sorts offering a glimpse of neighborhood life across the decades.

For those that want a house on five acres with horses and such, Vancouver even has a fair bit of that to the east in the Proebstel area. Like the title says, it's an eclectic mix with something for everyone :) 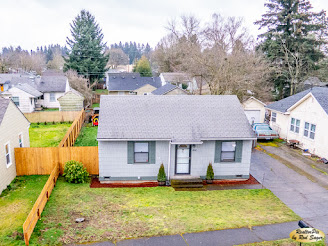 Buyers trying to find a house under $400k are going to meet a lot of other buyers doing the same thing. Down around $300k it is a zoo with multiple offers over asking the norm rather than the exception. With the Clark County Median home price right near $400k that is the new "sub-median" line.

Although COVID 19 has claimed many jobs the real estate market continues to be hot. Lenders are looking closely at buyers but when things align the loan rates are very low and that mean more buyers can afford a house despite the rising prices. This puts pressure on that entry level market.

But for the first time in a fair while, new homes are available in the sub-median price range. A brand new home for under $400k? Yes, not a lot of options, but they are out there. Before you run off to that shiny new subdivision be mindful that new home sin the sub median price range will be attached housing or at best a very small house on a tiny lot. The resale market can still deliver a small house on a big lot, and for many who seek some stretching room, that is the perfect ticket.

Did you ever think you'd see the day that a 800 SF 'Kaiser Cottage' would be fetching $300k? Well that day is here some of then are and they are getting snatched right up at those lofty prices. 2.5% interest rates on 30 year fixed loans will make a market out of thin air!