Just about everything you buy is on sale today but there are a few heavily market driven items that typically ignore Black Friday and real estate is one of them. Reports from the local MLS show that Clark County saw a nearly 15% year over year increase in the median home price. That is a very large increase. Although I feel a little less upward pressure in the market right now, I have no reason to believe that 2022 will not also be robust. I did not predict a 15% boost in 2021 and I certainly don't think we will see that repeated in 2022. But one never knows.

Locally Clark County is getting pressure from two key areas where people are leaving. NO! I'm not going to call out California, because that is not where our market pressure is originating. Number one is Portland, OR. More than ever before Portland is experiencing a bit of an exodus and in fact PSU does a routine data analysis of population trends for the whole State of Oregon and they have seen a dramatic slowdown in the growth of Portland. But the population according to their data is not shrinking.

There is still a positive migration but there is significant turnover happening with Portlanders moving out of the city to areas like Vancouver, Beaverton, Hillsboro, etc. The reason population still shows positive growth is that there are still people moving to Portland mostly from out of the area. Seattle, California, and even mid-western states are a source for new migration to Portland to offset the migration out.

The second source of pressure on our local market is coming from the Puget Sound Region where housing costs are DOUBLE what they are locally. There is a strong migration from the greater Seattle area to Portland and Vancouver as employees are relocating for a better quality of life. The advent of remote working has freed people to move far away form the office to areas with a lower cost of living.

So as long as we remain a desirable spot to live, we will see upward pressure on housing. So no Black Friday deals here in Clark County.

The local market here in Clark County is still strong, but we have seen slight softening in the intensity. Sellers still have the upper hand, but buyers can find homes and secure them without having to leap before they look.

Head north 40 miles to Longview and Kelso and a different story emerges. That market is roaring like ours was a year or so back. They are getting multiple offers on nearly every house that comes to market. Prices that were once 30-40% lower than Clark County are now more like 20-25% lower. It seems that frustrated buyers in Clark County and perhaps other parts of the metro area have 'discovered' Cowlitz County and are trading in a short commute time for an affordable home.

But how much longer will they remain "affordable" that is yet to be determined. I will be showing a series of homes to an out of state buyer tomorrow in Kelso and Longview as well as a few in Vancouver. My client is in the same situation having to decide whether a 60 mile one way commute is worth the savings or not. We shall see how that plays out.

Houses right now in Clark County need to be priced right. The days of listing at 5-10% over market and getting it are gone. Buyers will not overpay like they did a few years ago. Now the key is having the home price at or very near real market value and having it move in ready. Overpriced and/or rough condition homes will sit a while in the market. I don't think that is the case as much up in Cowlitz, everything seems to be flying off the proverbial shelves there.

I like it when the market moves towards neutral conditions and that seems to be the direction we are headed here in Vancouver and Clark County.

Rod is Away on Business Take a Look at a Classic 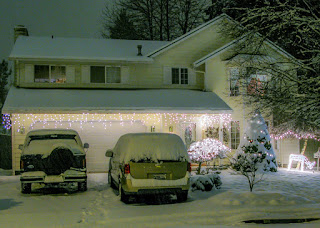 I have noticed the market has entered the holiday zone. Things are quiet... too quiet ;) Sellers should not fret the slower holiday period because buyers tend to be scarce but serious and the opportunity to sell can come in an instant.
I have a client that was thinking about writing an offer on a property that had been listed for a while and not sold yet. Just as the client was ready to pounce, I reached out to the listing agent only to be informed two other buyers made offers and the seller accepted one.

Even in the quiet times buyers are out there and during the holidays buyers tend to be very serious about buying. As I have said time and again, sellers are also serious when they decide to interrupt their holidays to allow showings.

The holidays also tend to knock people off the fence. It's as if a voice inside them is saying, "Let's get this wrapped up for Christmas." Buyers and sellers are often on the same page during this period and both can be a bit more malleable at this time.

December is actually a good month for Real Estate. It isn't a high volume month, but it is an excellent opportunity month.

Is the market slowing down?

So some agents are feeling a tinge of a slowdown and not just the typical seasonal bit. I am not certain if things are actually slowing down or not, prices seem to be holding but activity in general is definitely not as robust as it was this time last year.

Part of the issue certainly could be the fact the prices have gotten out of reach for a large percentage of people. Could that with the fact that the workforce has shrunk during COVID-19 and that certainly leads to fewer buyers. The silver lining is that there is also fewer listings. Adding to that the inventory of new homes is tight because of all the labor and supply shortages.

It would not be a crazy notion to suggest that we are in a bit of an artificial seller's market. If the supply chain issues are resolved and new construction gets back to turning out houses on a 4-5 month build, the lack of qualified buyers might start to make a difference and slow things down.

I have always preferred a neutral sale market in real estate. It tends to keep everyone more honest and faithful in the transactions.

As far as the market trends, things seem to be moving back towards neutrality. The exception would certainly be in that entry level price range under $450,000 where listings are still likely to result in multiple offer scenarios.