Is the market tightening up again?

Maybe this is nothing more than an anecdote, but our real estate market last year really felt like it was moving towards neutral conditions. But the market has come out a bit hot in the first month of this year with more buyers and not much extra inventory for them.

Now if you have the coin to toss around for something in the $600,000 plus range, you should have no trouble finding an eager seller. But down in the 'trenches' of the mainstream, things seem a bit tight and sellers are starting to take control again.

Perhaps the fact that interest rates are again dipping down into the 3's for well qualified borrowers, the buyers are swarming again! What ever the case, it will be interesting to see if the spring listing season levels the playing field or is met with an equal dose of hungry buyers.

Marketing trends seem to indicate that inventory levels are steady at a quick clip of around 2 months to a pending sale. Well priced homes will see bidding and overpriced houses may sit, but this market decided that 2020 was gonna be a 'thing.'

Buyers ought check in with their loan officer and make sure they can capitalize on these reduced rates and sellers should get ready for more showings because things are looking good for Q1.
Posted by Rod Sager at 8:30 AM No comments:

Many people ask about the differences between owning a condo versus a house and this is a very important question. There are multiple differences and they impact ownership on a legal level as well as a personal utility perspective. Neither is actually better or worse they both have a place in our system and one may be definitively better depending on your situation.

Owning a home versus renting is a different issue. Both houses and condos offer the equity opportunity and the ability to own outright the property. The value of the property will most likely increase over time and this adds an investment angle to the utility of a house. Condos are no different in this regard than a house.

First difference between a condo and a house is the legal difference. How ownership is held is very different in a condo than in most detached houses. When you own a condominium you have two types of ownership. You own the physical interior space in a condo much like you own the entirely of the property with most detached homes. However the physical structure and the underlying land property in a condo is co-owned collectively by all the homeowners. In most situations there is a home owners association with elected board members that manage the property including the maintenance of structures and common areas outside of the units themselves. This collective ownership has benefits and consequences that effect the use of the property. With a tradition house, the owner owns thee land and structures as well as the land rights beneath the surface and the airspace above (with a few government exceptions). With a condo you have limited ownership rights outside the interior walls of the unit.

Second difference in a condo versus a house is the utility of the property. this is touched on above in the legal differences, but utility is the owners use of property. Inside the walls of the unit a condo has the same utility as a detached home. Outside the building however is a more cooperative setting whereby you have a fractional ownership and thus a shared usage of the exterior property.

Utility benefits to a condo:

Utility consequences to a condo:

These are just a few concepts but the biggest advantage to a condo is the ability to have the equity ownership in real property without the structural maintenance and exterior yard work. The primary disadvantage is the opposite whereby wanting a garden or yard, or to make exterior modifications is usually difficult or impossible with condo.

There is something to be said for both and each has a welcome place in the real estate universe.

Vancouver has been pushing urban infill for years now and the trend of tightening up older areas and vacant lots has not slowed. It has continued at a blistering pace. The city is pushing developers to build more units per acre and is quite ready to authorize high-rise and mid-rise apartment and condo buildings to help keep the city growing without gobbling up the remaining open space in Clark County.

The city is also allowing a fair number of ADUs (Accessory Dwelling Units) in town including many of the older neighborhoods such as Rose Village.

These accessory dwelling units are not intended as multi-family but in fact act a bit like it. Housing, particularly affordable housing for young people and elderly people is very tight in out local market. ADUs are generally something that is ideal for an elderly parent or an adult child either of which prefer to remain close to "home" but independent. Often an ADU is built for that specific purpose but later on when the family member no longer needs to ADU often it becomes an affordable rental for someone.

Vancouver has been reasonably loose on issuing permits for these types of structures and in the current state of our local rental market it is a good thing. The city has been concerned with urban sprawl and ADUs are one way to help combat it.

One only need to drive around the city to see that density has been the modus operandi for much of the new development, especially in the greater Downtown area. with current trends, and ADU can significantly increase the value of a property. Whether the value will increase commensurate with the cost of improvements depends largely on the type of improvement needed to pull it off and the local governments continued support of ADUs as rental units.

An ADU can be as simple as a converted garage, of attic over the garage to a completely detach and separate structure. The latter is likely a fair bit more expensive. Before any homeowner starts hammering away, a check with the local government to be sure any proposed project is in compliance is a must.

Depending on a homeowners circumstances and ADU may solve a personal family dilemma while improving the vale of the property.
Posted by Rod Sager at 8:30 AM No comments:

Last week I gave brief outlook on the market for 2020 but today I will dive into the "state of the market" at the moment. Right now we have a bit of a tale of two markets if you'll pardon the Charles Dickens reference. In fact it may be a tale of three markets.

Breaking down conditions by relative price points will show that conditions vary wildly depending on price range. Now locations and neighborhood specific variables always play a big role in the real estate market, we tend to have broad market indicators that typically effect most segments similarly. But not so much right now. I will rate the market conditions based on a 20 point scale 0 is dead neutral. 1-10 Seller's market and -1 to -10 Buyer's Market. Take a look below: 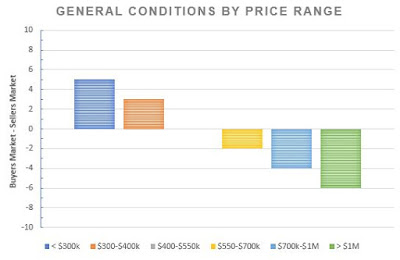 Often times news media will present broad market conditions and as such this broad market is neutral with neither buyers nor sellers holding the advantage. But looking more closely at individual segments tells another story. So broadly speaking, it is neither the "best of times", nor the "worst of times" pardon again the Dickens reference. But buyers in the bottom pricing segments will still find a competitive environment, mid range is neutral, and high end buyers can kick a few tires before buying.


Generally these conditions are healthy and sustainable. Pricing appreciation should remain in the 2-5% year over year range and that is long term sustainable that allow incomes to keep pace and homeowners to gain needed equity.

Well here we are again in the US another presidential election cycle... yay... you feel the lack of enthusiasm? I will not venture into politics here but I will encourage everyone of legal voting age to vote. So presidential election years often lead to flat economic conditions. It seems the closer we get to the election the more reservations in the financial markets. This has stood the test of time immemorial. This is not to say that recessions result, rather quite the contrary, things tend to stay in the status quo. So the 2020 economic outlook is more or less the same which has been fairly strong of late.

Residential real estate however is a notable exception. Most residential real estate is individuals buying or selling their own private property. They are impacted by supply and demand as well as capital markets such as mortgage banking and construction finance, but residential buyers and sellers decisions are based on their personal needs and situation at that moment in time, elections be damned.

The outlook for real estate in SW Washington remains positive with 2020 quite likely to continue this trend of near neutral market conditions and modest year over year price growth. Sales volume has been rather brisk over the last 12 months almost as if the market were favoring sellers, yet the market favors neither sellers or buyers in a broad sense. Individual macro markets are all over the board with high end properties facing more buyer resistance and entry level properties still firmly in favor of sellers.

The trend over the last several months has been running between 650-750 closed transactions every month in Clark County, which is rather healthy. I think we may see a slow down in overall new construction in the single family homes market, but a continued build up of urban properties like apartment towers and condo towers downtown and on the urban corridors.

Expect interest rates to be relatively flat and sales to continue at a brisk pace. 2020 ought to be a strong year in real estate that should be positive for both buyers and sellers.

Happy New Year!
Posted by Rod Sager at 9:03 AM No comments: