Ho Ho Ho It's That Time of Year, Again.


Holy Holiday Season, Batman, it's back! If you'll pardon the comic book parlance, it is a crazy time of year for most of us as Thanksgiving approaches and ushers in a hectic holiday period. Sometimes people are buying and selling real estate during the holidays and that can make a frantic situation downright dizzying.

There are positives and negatives surrounding real estate transactions during the holidays. Sellers can be assured that nearly every buyer looking at their house during the next six or seven weeks is a serious buyer that is ready to purchase a home. Why else would the add the frenzied process of home hunting on top of the looney-bin mental state of America's holiday season? Seller's also have the advantage of a tighter inventory during the holidays. Many seller's choose to remove their home from the market in December so they can enjoy a quiet and uninterrupted season. Tighter inventory often means higher prices. Many people tend to dress up the house for holidays and that can also be a positive for selling it.

Buyers also have a bit of an advantage during the holidays in that sellers tend to be motivated to sell if they are willing to hang tough and show through the period.

In general real estate still happens in the month of December and I find that pending sales are only about 10-15% lower than the autumn.

For sellers the winter time in general requires some care. Walkways should be kept free of leaves and ice or snow. Any holiday decorations should be arranged without any cords or cables crossing those pathways. Sellers should be encouraged to decorate but careful not to have too much clutter. Clutter does tend to make a home feel cramped.

Here are a few tips from the HGTV's Front Door on real estate during the holidays:

Frontdoor-home-during-the-holidays
Posted by Rod Sager at 11:40 AM No comments:

Banks can be a little rotten at times

I generally like to keep my posts as positive as possible. Sometimes however it is difficult to avoid a subject that has some negative tendencies. This is one of those time and needs to be addressed. Many of America's banks are handling real estate transactions in an appalling way. Buyers should be aware and cautious when entering into a transaction with a bank.

As many of you may know, the banks managed to tap into a large chunk of federal dollars in the form of what we commonly call "the bailout". These banks through various government programs are able to offset losses in foreclosures and short sales. The government wanted to be certain that our financial system did not collapse under the weight of the market crash in late 2008. Regardless of how we feel about the so called, "bailout", it happened and it's all water under the proverbial bridge now.

The problem is that many banks are working the system and taking advantage of the taxpayers and buyers. Banks often stall and dig in their heels on short sale transactions until they finally foreclose. Often it is the case that the bank fails to close on a short sale transaction that would have netted them say $200,000 only to foreclose and get a net of $150,000. Then they slither over to the feds and get more "bailout" money from one of those federal programs. I have seen this transpire many times over the last five years.

The latest trend among banks involve all this REO (Real State Owned) they now hold. Much of this inventory they are holding could have been off loaded in the short sale process that they seemingly sabotaged themselves. Milking the feds is apparently not enough. Now these institutions are preying on innocent home buyers. Banks are posting REO assets on auction sites with a real estate firm that will work for a tiny fee to "list" the property on a local MLS with no cooperating broker arrangement. Then they try to get buyers to engage in the transaction without the traditional representation of a real estate agent.

The modern system of the MLS cooperating brokerage arrangement transformed real estate for buyers from a shady proposition to a safe and properly represented transaction over 40 years ago. Now these banks are trying to circumvent all of the positive progress we have made in consumer protection. They want to lure buyers to an auction website without representation. It seems that some local MLS systems are a willing accomplice to this rather dastardly deed. They do not seem to object to listings being posted with no cooperating brokerage arrangement. Thus we see this reversion to the slimy 1960s used car style of home sales by greedy banks that just want to squeeze a little more profit out of the house the feds already bailed them out on.

Buyers should be aware that the listing agent has an obligation to the seller to negotiate the best possible terms for the SELLER. Banks are exempt from state mandated legal disclosures and often use their own in-house addendum forms that may have serious negative consequences to buyers. Most real estate agents work for a brokerage that won't be too pleased at taking on the state regulated responsibility of agency with out a cooperating brokerage arrangement. This puts the buyer in a position of either being unrepresented or having to hire an attorney or real estate agent for an additional fee.The more likely scenario is that the buyer will enter into a binding contract with the bank without representation. Who do you think will get shafted in that arrangement?

Buyers should be very cautious before entering into these agreements. Buyers that use an agent to purchase the majority of homes listed on the local MLS will enjoy the security of being legally represented under the state regulated agency laws without having to pay that agent a fee. The cooperating broker arrangement on the MLS assures that the listing fee paid by the seller is shared among brokers. This gives buyers the confidence that they will be well cared for and properly represented in the transaction. Some of our seedy banks are working hard to destroy that arrangement just to line their pockets with a little more gold.

There are sharks in the pond so be careful my friends, be very careful.
Posted by Rod Sager at 11:18 AM No comments: 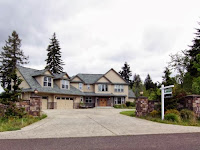 If you are able to consider homes in the 500k plus price range, this could be the best opportunity in a lifetime to own the home of your dreams. Prices have been on the upsurge in most markets all year. The high end market tends to trail the bottom.  Prices on the big houses are still pretty competitive. Now word has it, Jumbo loans are priced better than conventional right now! That 1.2 million dollar home from 2007 is still priced at 799k. With rates in the proverbial basement, why not make the move up. Below you will find an article written recently by NAR President Gary Thomas, with some insight.

If you’re considering how nice it would be to own a larger home, this may be the time to buy.For the first time in history, interest rates on jumbo mortgages actually fell below the interest rate of conforming 30-year fixed-rate loans.

As REALTORS® well know, jumbo loans are those over the local limit that can vary from $417,000 to $729,750, depending on the county.Traditionally, consumers who needed a home loan bigger than a conforming mortgage would pay a higher rate of interest for the privilege of borrowing more money—often a quarter of a percent or greater, and for a brief period it was nearly two percentage points. But with mortgage rates much higher than a year ago and declining profits from refinances, banks have become more aggressive in pricing mortgages. As a result, it is now cheaper to borrow in the jumbo market which is currently dominated by private lenders.

With interest rates at historic lows, more buyers are willing to stretch to buy bigger properties and more buyers are able to qualify for a jumbo loan. But even non-jumbo home buyers should look into the competitive rates at banks and credit unions.

There’s no telling how long it will continue, but this unusual circumstance may offer an opportunity for REALTORS®. Think big!

Washington State is not the first state you think of when pondering the exodus of retirees to "fairer" locales. You might think of the warmer sun belt states like Arizona and Florida. But Washington offers a unique combination of favorable taxes for seniors, a variety of climates from dry to wet and mild to wild. Washington offers its qualifying seniors a significant reduction in property taxes. There is no state income tax. Southwest Washington really hits the spot, because for those who like to shop and spend money the very nearby Oregon has no sales tax. A trip to the Oregon coast is easy and inexpensive.

Many retirees in the area keep two inexpensive (or expensive depending on their finances) homes. One in Washington State and another in California or Arizona. They fly south for the winter in November and return to our more tolerable climate in the late spring. usually it is better to claim Washington as the "home" state since we have favorable tax conditions for seniors. Although Washington is not the TOP rated state for tax friendly status, it would be when considering the live in Washington, play in Oregon angle offered by Southwest Washington.

Vancouver offers the glorious beauty of the west side of the Cascades with a moderate amount of rain and very modest snow. East of the Cascades delivers much more sunshine but also has more drastic swings in temperature and much more snow in the winter. Southwest Washington also offers close proximity to the aforementioned Oregon Coast and the metropolitan Portland area.

Speaking of the coast, Southwest Washington has the lock on reasonably priced beach property. The Oregon coast is world famous, largely because the state of Oregon spends millions of dollars promoting it. The southern Washington coast is equally spectacular but offers amazing values in property and taxation. This is especially true when compared to Oregon which is very tax unfriendly according to several prominent sources such as Money Magazine and Kiplinger.

Our southern neighbor, Oregon is rated as "least tax-friendly" for seniors while we enjoy the "tax friendly" status. Our base property taxes are much lower than Oregon and many seniors qualify for one of four property tax reduction programs. Sales tax is a much less intrusive tax than income tax for middle and upper income seniors. Arizona rated higher than Washington for tax friendly status but actually depending on income and spending habits we might be better than them as well.

Now that all this taxation benefits are out of the way, we can consider other factors. The well known fact that Washington state is absolutely gorgeous is a strong draw. We have four distinct seasons here in Clark County but none are severe. That is tough to find anywhere on Earth. It seems like the proverbial slam dunk for a retirees to move here. And many of them are moving here. So there you have it, Washington State is the best northern state to retire to. Start packing.