Parents Fleeing Public Schools... What will that mean for Real Estate Values?

The COVID-19 pandemic seems to have been the proverbial "last straw" for many parents regarding public schools. Public schools have long been in decline in the USA and now with COVID protocols and remote learning, mask mandates, and all of the other knee jerk reaction to this pandemic, many parents find themselves home-schooling or paying for private school. The numbers are actually a bit shocking in a state like Washington that has some of the best public schools in America.

Many Clark County school districts are seeing significant enrollment reductions despite massive growth in local population. As is seemingly true with all government entities, they rarely see it coming and often are too sloe to react. School districts are directly funded on a per student basis. District leadership continues to bludgeon parents with unpopular changes to teaching curriculum and a sizable percentage of the public is fed up.

Parents want their students to get an education, in elementary school a rounded mix of English, math, and science as a base for secondary schools where more sophisticated concepts can be introduced. Our schools seem to be off the rails with politics mixing in. There is no place for partisan politics in our public schools, yet they seem to be there anyway. Parents are clearly frustrated and not just one side of the political isle, this has become an almost unifying issue.

So what does this mean for real estate values? There are several areas here in Clark County where neighborhood values are higher largely due to the presence of highly rated public schools. I have often argued that the difference between the best and most popular schools and the least popular is pretty minimal. Washington has an iron clad constitutional mandate to keep all public schools well funded. But that doesn't stop people from paying a premium for neighborhoods with well reviewed schools or districts that have more premium infrastructure.

Parents seeking the best public schools are probably the same parents now making alternative education decisions. Property values that have been driven up over schools could see a slowdown in popularity as parents decide to buy a in a less expensive neighborhood and home school or send the kids to private school. The data is in and it is clear that in person instruction is very important to developing children academically. Hopefully the idiots running the schools at the state level will realize this before the schools suffer tremendous funding shortfalls.

In the mean time, why would a family pay an exorbitant premium for a particular school district if they are not going to send their kids to those schools anyway. That may spell trouble for those neighborhoods over the next few years.

Yes the headlines are mostly true, the real estate market continues to see strong sales and demand is still outstripping supply. A lot of this locally can be partially tracked to the new home construction which is suffering from supply chain woes. Nearly a thousand resale homes closed in July this year and that is getting into the numbers we saw at the peak of the last big bull housing market in 2007.

Buyers can at least take solace in the inventory numbers that are softening a bit. Instead of ten multiple offers on the three-two with a yard for $400k there might only be five. Of course many sellers are opting to take a more leisurely approach to selling with a higher price intending to bring the buyer that really wants the home rather than the mad rush desperadoes trying to edge each other out.

The extra inventory is appreciated but the market will still gobble it up. There are a fair number of locals moving out of the area, chasing jobs in markets where COVID is not as restrictive on the factories, and supply chain. Texas is a big recipient of this minor exodus. Locally the housing is rapidly being bought by others moving in. We are starting to fill up with Seattle area transplants working from home and taking advantage of Clark Counties relative value when contrasted with King or Snohomish counties. That and all the Portlanders fleeing that rapidly declining city to Clark, Clakamas, and Washington counties.

The next 6-12 months look solid for Clark County real estate.

Inventory pressure is finally started to lighten up a little. New construction is booming but a labor and materials shortage is keeping things moving at a slower pace than demand. This of course puts pressure on the resale market as more sellers realize they have the upper hand.

Most people have been sitting on their homes, perhaps the fear associated with the pandemic or the where will I go question that looms over many potential sellers. Whatever the underlying cause, the market is seeing a welcome bump in inventory.

That mentioned, we still have a low supply and multiple offers are still the typical situation on any home under $1,000,000 that is priced properly. So buyers you can't quite relax yet. The good news is that most analysts are still mildly to moderately bullish on real estate through the 2nd quarter of 2022.

What might put the brakes on a roaring industry is inflation and potential rate hikes that typically arise during heavy inflation cycles. Projections for the rest of this year are almost "Jimmy Carter " levels of inflation. Buyers in contract now should have a solid 1st year of appreciation. I'd like to think the fed has learned how to keep interest rates in check but they still can't continue to pump cheap money into the economy. At some point rates will creep up.

Rates have been stupid low for several years now. It would be heathy to get back into more normalized rates in the 5's or 6%. That would trim a lot of buyers out of the market though. Getting in while rates are low and locked in on a 30 year at 3% is beneficial in a potentially rising rate economy.

There is a silver lining to the dark cloud hanging over buyers.

Will You Soon Have a City Funded Homeless Camp in Your Backyard? 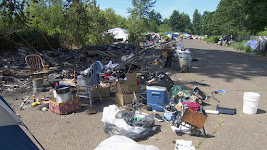 The answer is : "quite possibly." The Vancouver City Council has made changes to the ordinances that regulate camping in public spaces. They have put into motion a plan to have fenced off "camping areas" to allow up to 40 homeless people camp in a 'controlled' environment with proper sanitation provided. I like the idea of minimizing the environmental impact that street camping has. But last count I saw published in the news was 800 homeless people are in Vancouver on any given night. The City of Vancouver states on their website that approximately 500 people are homeless in the city. Using the lower city number, they would need more than a dozen campsites to accommodate their own estimate. Where will these campsites be located? And what action will the city take to protect residents and companies that are impacted by these "facilities?" No such details are available. Here is a link to a news article about the changes.

These campsites will almost certainly affect property values for home owners and businesses nearby. They won't be building these in the posh neighborhoods on Evergreen Highway will they? Certainly not. These will likely get dumped into middle and lower class neighborhoods causing a decline in neighborhood stability, heath, and safety. These camps will cause a loss of value to property owners that often had to claw their way into this expensive housing market. They had to dump their last few nickels and dimes to buy the house, then pump their heart and soul into making it their home. Now here comes the lazy city council that just punts the homeless problem into their neighborhood.

So what will the city do to impacted residents and businesses? The city will do absolutely NOTHING to protect tax paying residents from the impact of this program unless the concerned citizens of Vancouver show up at City Hall and demand it. This means residents need to show up at City Hall and voice their concerns, and ask the city to release the proposed or approved locations of these camps. If no one stands up to demand accountability, no one will get accountable behavior from elected officials. This camp action is a 'punt' that avoids dealing with the underlying issues that lead to homelessness. Permanent homelessness is not an affordable housing issue as much as it is a drug abuse, and mental health issue.

People all too often confuse these types of "solutions" with compassion. This is not compassion, this is an action that simply perpetuates the problem, and as witnessed in Portland, brings MORE homeless people into the region seeking the amenities afforded by these structured facilities. No my friends, this is not compassion. The compassionate thing to do is to get these people off the streets and into stable housing. This means providing drug intervention, mental health facilities, and job placement opportunities.

There are some people who do not wish to be helped, they refuse to accept help and in open defiance will camp on our streets, urinate and defecate in parks, or perhaps worse in a creek that leads to the Columbia River while leaving trash to blow in the wind and clog our waterways ultimately adding to the Pacific Ocean Garbage Island. This campsite plan does at least address the environmental issues, but does not alleviate the problem at all but rather will likely amplify it.

We cannot offer help to those who will not accept it, nor should we offer our compassion to those who refuse it. Enabling people to continue to make bad choices is antithetical to compassion. Yet that is the best that Mayor Anne and the council can offer.

A firm hand in keeping street camping out of our city is needed here and the money for this idiotic program should be diverted into drug and mental health programs for the homeless and more policing of homeless people that are sometimes a danger to the public. We should be offering help to street people who want to get off the street, and have the police remove illegal campsites with prejudice. Pumping potentially millions of dollars into a program that is more likely to perpetuate and expand the problem is foolish. All of this wasted money comes at the expense of tax paying citizens.

The wealthy class of elected leaders and their rich donors will not feel the pain of this program. No, the middle class and poor people in Vancouver will bear the burden of increased crime, vandalism, and lower property values. The every day citizen will suffer the most. That is just typical political crap once again dumped in our neighborhoods.

We can do better.