I warned about this... now it's happening. 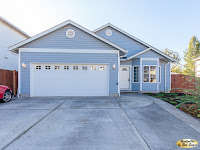 That is a rather ominous headline. The warning to which I refer is the issue of entry level home buyers getting priced out of the market. With prices escalating at a rate of roughly 10% annually and wages rising at only a fraction of that, many buyers no longer qualify. I have had buyers hesitate sometimes against my recommendation, and now they cannot afford a home.

In the market under $300,000 it is a strong seller's market. "Seller's Market" refers to the conditions favoring sellers. Any home priced well sells quickly and often with multiple parties bidding above the listed price. From $300-$500k it is a moderate seller's market. Above $500k it is near neutral with a slight favor to sellers.

Entry level buyers need to act now before they find themselves unable to buy. These kinds of markets generally require buyers to be less picky about the home. I find many people buying their first home feel like they must get the "perfect house". That is just highly unlikely. We have an interesting market issue that is making the entry level home more competitive than in the past. Retiring baby boomers are downsizing into the same types of homes that first timers are seeking. This has put enormous pressure on the sub-median priced homes. These 'down-sizers' are often coming in with huge down payments or all cash after selling a much bigger home.

All else being equal, a seller would prefer a cash offer as there is no third party (bank) involved in the transaction. Cash sales close faster and with a higher success rate. Some buyers have just decided to sit it out. They will rent and rents are rising nearly as fast as home prices.

Here is the basic math. The oft used qualifying formulas that the debt to income ratio needs to be less than 45% (FHA) and the total monthly payment on the home including principal, interest, taxes and insurance (PITI) must be less than 33% of total income produce semi-predictable scenarios.

So a borrower(s) that earns $3,000 per month can have a house payment equal to or less than $1000 per month and no more than $1400 per month in total debt service (credit cards, car payments, house payment, etc.) How much house does $1000 a month PITI buy? About $175,000 at current rates with an FHA loan and 3.5% ($6,100) down. There are many variables in lending and this is just a typical example based on some standard underwriting guidelines. A buyer with good credit can likely rent a home at $1400 a month despite only qualifying for $1000 PITI mortgage. Landlords have more discretion in determining the ability to pay of a renter. Of of this considered, buyers need to talk to a lending professional to see exactly where they lie in the mortgage market. Some borrowers can borrow more based on a variety of other underwriting factors, some less.

Here in America's Vancouver, $175,000 doesn't buy much house. At current rates of market appreciation a $175,000 house today will cost $179,000 in just three months! Many buyers miss out on houses because they bid too low. Sometimes it is due to qualifying and that is understandable. A buyer should never bid more than they can qualify for. But sometimes they are trying to get a "deal" and in this market trying to get a deal has a 95% chance of costing the buyer more money.

So let's say you have a house at $200k and you offer $200k but someone outbids you and gets the house for 203k. Three months later a very similar house will be offered at closer to $207k. Would it have been prudent to step up three months ago? YES!

Many things can happen. Buyers could have a financial event that disqualifies them and takes them out of the market. Some say that is a blessing. I say, often it is not. One needs to rent if they cannot buy and rent is as much as a comparable mortgage in this market. Having bought a house and then having a crisis can be better than being a renter in that scenario. Why? Because a landlord can evict you long before a bank can foreclose. And short of being homeless, you have to live somewhere, living in your own house is almost always better than living in a rental when times get tough. The financial event could be unrelated to the buyer. It could be an interest rate hike that pushes the buyer out of the market. It could be bank regulatory changes. Buying now is almost always better than waiting in this kind of market.

This is often most difficult for new home buyers to grasp. For those homeowners on the fence about listing, now is a good time to list a home price at or below the median. The Clark County median home price is hovering just shy of $300,000 right now. The bottom line is this, buyers are losing buying power rapidly and sellers are losing opportunity. The future is uncertain, but the 'now' is predictable.
Posted by Rod Sager at 10:19 AM