The City of Portland is more of less built out already. In fact a case can be made that Portland has been effectively built out for decades. When a City reaches build out and has no more room to expand, then real estate becomes tight. Portland is surrounded by other cities and protected space so as to have no more room to grow. There is no new land in Portland, only reclaimed land. This makes building in Portland more expensive and thus pushes prices on resale homes ever higher. It is a dilemma faced by many cities in America.

The rising housing prices in our next door neighbor has put pressure on the markets in surrounding areas such as Beaverton, Hillsboro, Gresham, and of course America's Vancouver. These surrounding areas have room to grow and room to build new homes and that keeps the relative price of housing a little lower compared to Portland.

For many years now, Vancouver Washington and Clark County at large has been a primary destination for Portland transplants. We are close to Portland, we have excellent schools, great highways, and a wide variety of housing types from urban high rise condos with stellar views, to Southern California style suburban neighborhoods with 4 beds in a culdesac.

Portlanders continue their exodus into the promised land of Clark County. These buyers flooding our market have pushed the entry level real estate to the brink. They have created a dynamic of puffed up low end houses but the middle market still enjoys some flex in pricing. $275,000 for a dated 1950s rambler but 25k more buys a brand new house the same size. It is an interesting scenario that there is little jump in price from a 1200 SF 3 bed 2 bath and a 5 bed 2.5 bath home in some neighborhoods. 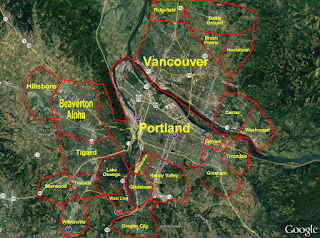 There will always be those who want to live in the "city" regardless of housing costs. They who would live in a one room studio for $2000.00 a month before moving to the 'burbs'. Portland will always be that "city". No matter how big Vancouver USA gets, Portland is the core city for this region. So it (Portland) will continue to produce higher density housing on reclaimed land to keep the real estate market from stagnating and will continue to produce buyers for the adjacent cities like Vancouver, WA. that offer more traditional detached housing at prices that working class people can afford.

I suppose this synergenic relationship can benefit both cities. Portland continues its rise among major US cities as it become more urbanized and cosmopolitan, while Vancouver continues its mixed use approach with a rising downtown "city" core and a continuance of some of the urban sprawl.

Here in the 'Couv' we can enjoy the fact that as tight as inventory is it's not as bad as it is south of the river.