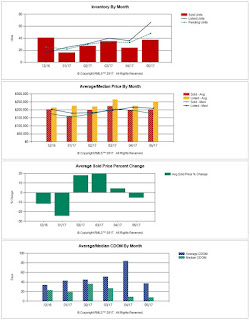 The condo market has ridden the wild roller coaster over the last several years. This is not atypical in a market that follows an extreme adjustment like the one we had back in 2009.

Condos took a serious beat down in the 2009-2011 free fall. Locally there were two major factors. The first was the obvious market crash that the whole nation felt. But more localized was the over abundance of condos that had flooded the area, particularly in Downtown Vancouver.

There were luxury units in Vancouver Center and 500 Broadway that were fetching close to a million dollars in 2007-08 that got wiped out in the foul mood of real estate in 2010-11. Those units saw reductions in sales prices in the 60% range!

Condos were much slower to rebound and those ultra luxury high-rise units have not yet returned to the lofty price typically associated with lofty heights high above the city. But lower priced condos are seeing a surge. As single family detached and attached housing has soared, suddenly the traditional condo with the expensive HOA dues still makes financial sense for people in the entry level price ranges.

The charts provided represent the last 6 months of activity wherein we see the days on market coming way down. Note: you have to ignore average with this as the unit totals are too small and the average is heavily skewed by a couple of short sale or bank owned problem units that sat for years.

Negotiated prices on condos as recently as six months back were well under asking, then they popped up to meet the rest of the market averaging over asking, and now seem to be settling in at or near asking. I think the bump in available inventory cooled the jets a little on condos.

Anyone sitting in a mid-level to upscale condo may have a solid opportunity to sell now at top dollar. Starting next year the new waterfront will begin coming online with new buildings and an urban buzz. Part of that will be a phased in 3300 housing units which will be a mix of condos, apartments, and senior housing. This may tug on the values a bit in the middle to upper end of the condo market elsewhere in the area. 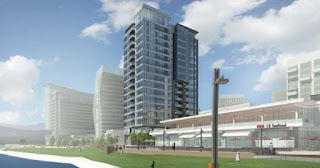 I have my eye closely on the condo market as I am most excited about the waterfront development. They are working on the cable suspended Grant Street Pier right now and several of the mid-rise and high-rise buildings are starting to go up.

All things considered, condos are back and they should start filling in as relief for the entry level buyers and practical for those seeking to down size as they approach retirement.
Posted by Rod Sager at 9:00 AM