I see many remodels happening out there. Many homeowners are flush with equity as our market has been solid for a number of years. Personally I have been taking care of some deferred maintenance on my own home. We recently painted our house which it really needed. We are also going to do some light remodeling.

I believe it is wise to be very cautious remodeling to trendy styles unless you are remodeling to sell or you tend to remodel often. Trendy is just that, a trend and trends change rapidly. The style market doesn't care how much you spent on that carpet or flooring, like all markets it is cold and unconcerned with your wallet or feelings.

If you are remodeling for the long haul, sticking to classic and timeless never hurts. The flashy color schemes and cabinet styles of today will look dated in a decade. Sometimes styles come back and sometimes they go away for ever. I don't think those 1980s parachute pants are ever coming back ;)

For those old enough to remember, the 1970s was the era of 'wall to wall' carpeting. Many homeowners carpeted over their beautiful hardwood floors to be in on the trend. Wall to wall carpet was sold in new homes as a positive feature when in reality it was a cheaper solution for the home builders. As we all know now, wood and wood laminate surfaces have been back in style for quite awhile and are likely to remain so. They also never really went out of style even in the 70s.

Think about enduring styles that never seem to go out of favor when remodeling your home for the long game. Trendy works very well for someone trying to sell, but trendy can fade away in short time. That parachute pants craze only lasted a couple of years, but everyone remembers them, for better or worse, mostly worse.

A few tips for maximum enjoyment and timeless style. Generous use of wood or wood laminate surfaces and don't skimp here. Don't use the cheap $1.29 a foot garbage. Step up to at least the $2.50/foot grade and preferably the best laminates are closer to $5/foot, the install labor is about the same for cheap laminate as it is for the good stuff. Avoid trendy wood patterns as that will look dated as well. remember the parquet floors of the eighties? Those are always in fashion on the basketball court, not so much in your home. Bamboo has been trendy but what will you think of it in 2025?Large area rugs rarely go out of style as long as they are in the classic vein. 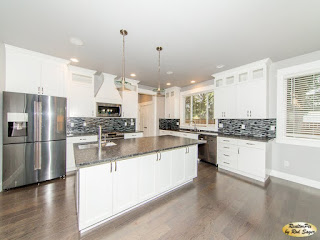 In the kitchen white never goes out of style, especially here in the Pacific Northwest. White in the kitchen is actually coming in as trendy at the moment, but even several years ago when dark woods were the rage a white kitchen was still good. White is light and bright and most people prefer a bright kitchen.

In general light and bright is ideal in a home. An exception would be a classic 'library' style den or a movie room. Dark rooms are not inviting in any era.

Minimalism is always in fashion. Clutter is always clutter and few people want to living in a packed junk store. Having lots of 'negative' space gives the mind a chance to relax and relaxation is typically a good element of design for a home.

For the interior walls light and bright and neutral rules the day in any era. Off whites, taupe, or gray is always in fashion. Remember trendy comes and goes, but some things are always OK. In the late 1980s the rage was mauve and burgundy in the home. It was every where. But it went out of fashion and has not returned to favor some thirty years later. When I see a home with mauve and burgundy I immediately think of 80s "hair" bands like Twisted Sister and holy cow this place is dated. In all fairness the mauve and burgundy fad was a heck of a lot better than that 70s avocado and bright orange nonsense!

So in closing think about what you are trying to do. If you are remodeling with the intention of selling or remodeling again a few years, then hitting that latest fad in trendy home decorating is fine. If you are remodeling the home you intend to stay in for awhile stick to the classics and the timeless favorites because timeless is exactly that.
Posted by Rod Sager at 8:30 AM