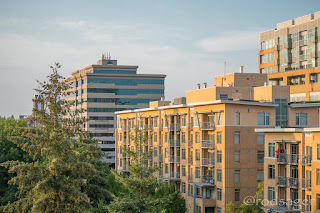 The funny thing about it is this. When neighborhoods are run down they rend to produce less income and thus taxes for local governments and often have a higher drain on local services funded by those taxes. People are often complaining about all the issues associated with these types of neighborhoods, increased crime, vagrancy, drugs, etc.

When old industrial areas are converted to residential, this is less of a problem sine no one "lived" in the abandoned industrial areas. One might think of Portland's South Waterfront or Vancouver's new waterfront. But ultimately these areas create a sphere of affluence around them putting upward pressure on rents and property values in nearby neighborhoods.

It often becomes the classic scenario of pleasing one group by pissing off another. For local governments chasing tax revenue the choice is easy, gentrification benefits the community at large so long as the local elected officials use the new found tax wealth to benefit the community at large. Sometimes that happens other times not so much.

The moral of this tale is that if you want to be able to stay in an area that is rising up, you better buy while you can. Often in these rising value scenarios renters have to move, owners choose to move. That is a big difference.