Vancouver Neighborhoods All Over the Board

Neighborhoods do matter. People will pay a premium to live in a neighborhood that offers something extra over another. Better schools, closer to services and shopping, views, access to highways or closer to major employment centers, and so on. Vancouver is a large enough city that it has a full range of neighborhoods across every urban and suburban subset. Just out side of town Vancouver even has some semi-rural neighborhoods with homes on small acreage.

But neighborhoods are hard to measure without a local real estate pro. Simply looking at a map or stat sheet with median prices will not tell the tale. Sometimes a better neighborhood has a lower median price. For example a neighborhood like Fairway Village in Vancouver has a lower median price than Felida. But pound for pound or foot for foot, Fairway Village is spendier. You see, Fairway village is a subset of Cascade Park East and it is entirely comprised of homes aimed at retirees and most are two bed units. These are smaller homes and thus tend to be a bit less expensive than the much larger homes typically found in Felida.

Often times the median price of a neighborhood is driven by the fact that the area is confirming with lots of similar houses either big ones or smaller ones and thus one is lower than the other. Other times one neighborhood may have very similar styles of homes yet be priced very different, here is where the classic "location" issue arises. One mind find that lower priced areas are not always undesirable. The Esther Short neighborhood is one of the hottest neighborhoods in the city, yet the median price in that neighborhood is well below the citywide median at only $350k. What gives? Esther Short is downtown and the waterfront. The bulk of the homes in the area are mid-rise and high-rise condos or apartments with an average size of less than 1000 square feet. So the median price per square foot is really high at more than $350 per foot. Contrast that with the expensive Riverview area the most expensive area at a median price over $1,000,000 but an average home is around 3000 sf. That neighborhood averages about 300 per foot. I wrote about price per foot and how it is rarely a good indicator of real value, but it shows that median pricing alone is only part of the neighborhood equation.

Below is a map of Vancouver with pricing as of last month for broad neighborhood areas in and around the city. The overall median price for Vancouver was $423,000 at that point. 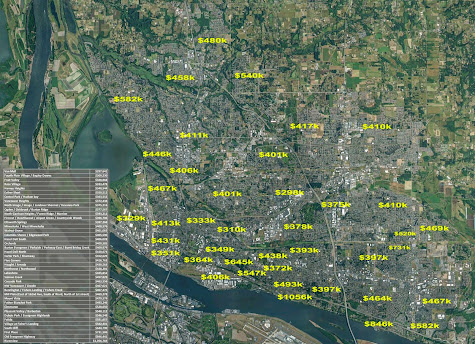