The last 5 years has seen Vancouver's Downtown area add a dozen or more mid-rise and high-rise residential towers. Most have been apartments with the exception of the Kirkland Tower opening very soon, with 40 luxury condo units. Will more condominium units come?

A couple of years ago Washington State made some important revisions to condominium law to make it easier for developers to build them. Primarily revamping the lawsuit section to help soften liability exposure. But since that revision the Kirkland Tower is the only urban condo building to go up. With so many apartments in the city core filling up as fast as they can build them, one might expect to see some condos.

Certainly condo towers are a little more difficult to pencil out whereas rental units can be a cash cow. But the city is looking for long term residents to fill the city center and eventually tenants get tired of making the landlord rich. There are a great many apartments Downtown fetching rents at three times the citywide median. These are people who can certainly afford to buy a condo. 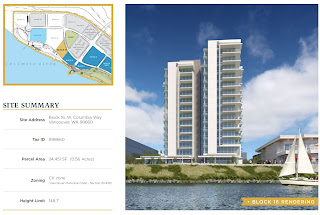 As of now the only condo project not name Kirkland is the proposed 14 story Block 16 development shown on the Gramor Waterfront website. That tower is more in the concept phase at this point. It is an 83 unit proposal versus the 40 units in Kirkland. The building isn't much bigger in size so I'd guess these will be mostly smaller sized units within reach of people that are not multi-millionaires. It's portion fronting the mighty Columbia however suggests the units would be fairly spendy.

I's like to see some additional high density condo projects go up downtown to give some ownership opportunity to the thousands of people currently renting in our fantastic and revitalized Downtown.