The Regional Multiple Listing Service is the primary MLS for the Portland-Vancouver Metro Area. The September data is complete and the MLS released is compilation report for members a few days ago. The report shows a strong decline in both new listings and closed sales versus the same month last year. 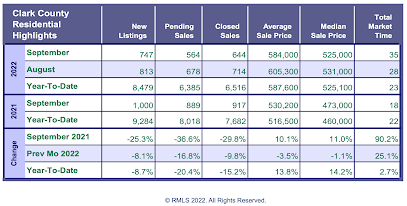 The numbers can be a bit deceiving as it makes it look like the market had a crash. It did not. New listings were down 25.3% over last year and pending sales in the same period were off by 36.6%. Marketing time remains a very healthy 35 days and the median price is stable for the moment. The report stated that current inventory levels are still below two months and that indicates a seller's market remains, for now.
Looking at the prior month shows two things. One is the normal season slow down entering the fall and the other shows that inventory levels are high enough that buyers are less likely to fight over listings like they were a few months ago. I believe that appraisers are also tightening up as well and that can lead to reduced prices at close. The median sales price dipped from August to September by 1.1% and if that becomes a trend we may see a slide in overall pricing. It should be noted that the interest rates rose substantially right as September approached and that likely played a role in slowing down the pending sales. Many buyers were eliminated from qualifying as mortgage rates jumped from 5% to 8% in the span of a week or two. So long as new listings decline at similar rates to pending sales the pricing in the area should remain stable. If we suddenly get a surge of new sellers and buyers remain flat, then of course that places downward pressure on pricing.
Six months ago I was bullish on the notion of a flat or soft landing with mild pricing drops. Today I am more split. This report shows that both supply and demand are falling but demand is falling a little bit faster. The rates are probably the biggest culprit on the demand side. Although I still feel like a soft landing is possible, it seems that we have a higher chance now of a medium to hard landing than we did earlier this year. I still remain optimistically cautious about the market over the next twelve months. Seller's thinking about moving, and who need to protect their equity might want to list now.