The National Association of Realtors released information recently that shows the average tenure of a homeowner has increased to roughly nine years.  The chart shows a long, steady period of average tenure between six and seven years before the rise to nine. 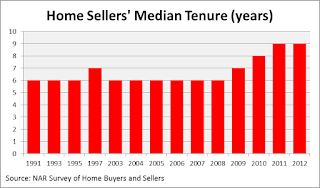 I believe this data needs to be taken in the context of our recent prolonged flat and declining price period we just came out of.  Many home owners were unable to make that move they wanted to make because of one or more economic factors.  They may have lost their job, their home value could have been "underwater", they might have been nervous about the economy, etc.

I do not believe it is coincidental that the rise to nine years abruptly started in 2009. This of course was the year following the great banking crisis and real estate market crash of October, 2008.  I would neither be at all surprised if the trend begins to return to that normal six to seven years as the real estate market has stabilized and consumer confidence is beginning to return. This is a trailing indicator and even as the market returns to modest growth this chart may continue to rise before it starts to show a decline.

The current market conditions at the entry level are tight inventory, modest demand and ridiculously low interest rates.  If this real estate market segment remains hot for another year or two the middle will begin to surge as well.  The move up market takes time to develop and is to a great extent reliant on the performance at the entry level.  Entry level sellers often become mid level buyers and to do so, they need equity in their current home.  Our modest gains in real estate values are helping them get that equity back.

Providing that our economy does not take a nosedive, we should begin to see a sigificant increase in the demand for mid level and high end housing over the next few years.  To keep the real estate market healthy and robust we need the economy to cooperate.  Interest rates ideally would remain at or below 6.5% (we are way below that right now), job growth should be improving at least slightly and rental rates need to remain aggressive.

I am quite bullish on real estate right now.  I do not see the market tearing a hole in the fabric of time and space like it did from 2002-2007, but I do see some modest, healthy growth for the next several years.
Posted by Rod Sager at 10:41 AM