Another year is perilously close to its end. The older you get, the faster they fly by. It's a cruel irony. When you are 7 years old it seems like an eternity from Thanksgiving to Christmas. Children can't wait, it takes soooooo long to arrive. Now it's like don't blink, Christmas is here; again. Slow down already!

2013 is essentially in the books. It was a strong year for real estate in our local market and in many markets across the fruited plain. The sales volume is up significantly over 2012 and the local median price is up nearly 14%. Final numbers will arrive from the MLS in the middle of January and I will be certain to post them when they arrive. 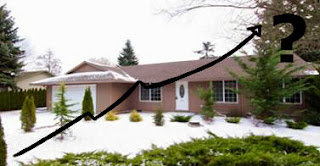 So in regards to the upcoming year; what might we expect? As much as I hate to try my hand as Nostradamus, I will endeavor to give an idea of where I think current trends in the real estate marketplace will take us in the new year.

There are many variables that effect the real estate market. Residential real estate or the "housing" market is affected mostly by the general economy and employment, as well as mortgage interest rates and the availability of lendable assets. There are dozens of other market indicators but those are the two big ones.

The economy and jobs market seems to be flat right now. We have a very soft economic growth and questionable job growth. This "soft" economy could be an inhibitor in 2014. 2013 already showed a market shift locally from the bottom/entry level to the lower to middle move up market. Pricing has been the biggest driver in the move up market as we hit bottom on pricing somewhere in 2011 and then saw the movement up as demand increased. In general I am quite bearish on the economy. I think we will continue to see a slow growth rate and that could pose problems for the housing market locally and in many of America's more expensive markets.

The real driver behind the robust numbers in 2013 has been interest rates. I believe that has been the largest contributor to this latest round of upward pricing over the last two years. Rates have been below 5% for quite a while and through the first half of 2013 they hit rock bottom as 30 year fixed rates were in the mid 3% range. The Fed has been backing these low mortgage rates and has shown every indication of slowly moving away from that position. So far I think the Fed has done a pretty good job of helping the housing market by keeping loan rates affordable. I feel that they will need to slow it down due mostly to legitimate budget concerns. As they back off, rates should creep up. As long as they stay below 6% the real estate market should remain healthy and strong. But the higher they go the fewer people qualify for loans. This could lead to more relaxed appreciation in 2014.

Looking at the data; my biggest concern is the middle section of the market. Many homeowners have been sitting in homes that are "under water". That is they owe more than the house is worth. This latest uptick in pricing is starting to free many of these people to sell as their home value climbs up above the debt they owe. I would like to see that upward trend continue. Although I don't expect to see 14% appreciation in the middle this year, I certainly am hoping to see 6-7%. This would help many people sell their middle market homes in the $250k to $300k range and either downsize or upgrade depending on where they are in their lives.

The entry level market right now is poised to continue upward pricing trends because there are two demand pressures on it. First is the traditional new family and first time home buyers looking to take advantage of favorable pricing and interest rates. Secondly is the retiring Baby Boomers looking to bail out of the big house they raised the kids in and move into to something smaller and more manageable. The Boomer generation is large enough that it is making a significant impact in pricing pressure in what is traditionally an entry level housing market.

I am seeing an interesting development as a result of these issues. There is a huge difference between 225k and 250k in terms of what one can buy. Anything under $225,000 is seeing high demand and strong appreciation. Conditions quickly begin to relax as the price moves up above $225k. We are seeing those garden variety three bedroom two bath homes nudging up against that $225,000 barrier but at a cool quarter million it's a spacious 2200 square foot four bedroom home.

That is really where the general economic conditions start to play a factor. With interest rates as low as they are, two $10-12 per hour workers can afford an entry level house in the $175-195k range. As we move up in price better jobs are required and that is what seems to be in short supply. If this economic trend continues and we see an increase in interest rates that will lead to a middle market pricing plateau. If the middle stagnates then the bottom will also feel negative pressure. This is why I feel like we will have less appreciation next year than in 2013.

Overall my outlook for 2014 is very sunny. Maybe not quite as sunny as 2013 in terms of activity and sales volume, but I do believe the middle market will perk up at least a little bit, this spring. As much as people love to see a roaring real estate market; it really is better to be the tortoise and not the hare. A nice and steady continuously northward march is healthy and secure. I think that is the trend for 2014.

So there it is; I am dangling out on the end of the wobbly limb of prognostication. In a nutshell, I am cautiously optimistic. There are too many variables to the housing market to really know with any certainty what will happen. All I can do is look at the data, make a few presumptions based on experience and hope for the best.

I wish you all a very happy new year!