Should You Buy New or Resale?

This is a question that comes up a fair bit with buyers looking to move into a 'new' house. "New" meaning new to them. But locally a fair number of new construction homes are being built and this is a viable option for home buyers and there are pros and cons.

Some may find the notion of a new house having cons as silly but there are definite disadvantages that can arise with new homes versus older homes. Most of the negatives can be overcome with money, but most home buyers have limited amounts of it. So what are these cons I'm talking about anyway? Well new houses tend to be built on small lots in neighborhoods with narrow streets and often have a lack of mature trees. Often is the case that a brand new house is built in a development and construction may continue on for months or even years after the new buyer moves in. New home subdivisions are also often filled with what ever styles are in vogue right now. Buyers may not like the current trends in home styles and floor plans. 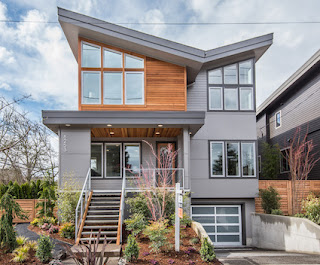 Right now the industry is seeing a lot of attention in the modern style of home with sharp angled roofs that are flt to one side. Locally these homes also have generous use of wood finishes ont he exterior to give it a bit of Northwest flair. These modern northwest styles are like a blend of chic Malibu meets Paul Bunyan

On the up side a new home typically has a builder warranty. Everything is brand new so those expensive maintenance items are usually well off into the future. They tend to have the latest tech and the most efficient insulation and windows.

Older homes are quite often built on larger lots in neighborhoods with wider streets and mature trees. Sometimes these older neighborhoods are closer in to the city center or downtown areas as well. With the exception of the 1950's and 1960s, older houses tend to have a lot of "character." This is particularly true in pre-war homes where the attention to details in the mill-work were much greater than today's crummy composites.

Where older homes have older systems and designs that are less efficient, they tend to offer a larger lots and a lower price than a comparable new home. Many houses that are between 25 and 35 years old have already had much of the expensive maintenance done. Things that costs thousands of dollars like a new furnace, new roof, etc.

In the final analysts it should come down to what home makes the buyers feel most 'at home'. All too often I encounter a buyer that is closed to the idea of a resale home or vice verse closed to a new home and in either case I suggest they look at some of both! One never knows when and where home will call, but when it calls, one always knows.
Posted by Rod Sager at 8:30 AM