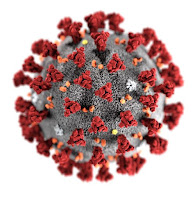 Wall Street is having a hemorrhage over the Corona virus (COVID-19) and the broad stock market has managed to shed more than a quarter of its value in just two weeks time. Is this as bad as it looks? The short answer is: "not really." In my estimation the stock market was a bit overvalued and all it needed was a trigger event to cause some major adjustment. This sell off is an overreaction to a near non-event. However the over reaction may be deliberate on the part of the major market players, the uber rich.

In contrast to the so called "Great Recession" that began at the end of 2008, this event is not being "triggered" by an underlying financial crisis like we had in 2008. Leading up to the last recession, back in '08 there were several real and identifiable problems including a fair bit of corrupt behavior in the mortgage lending business as well as a few government fails on SEC regulations and banking. The 2008 crisis was real. This crisis is simply an excuse for super rich billionaires to take massive profits on what was largely considered to be a puffed up stock market.

The core economic indicators are still much stronger than they were in 2008. That said, this could potentially become something to worry about if the actual job market starts to soften as a result. I still think that isn't going to happen just because of this Corona scare and the recent Wall Street sell-off. A broad economic downtown will require other issues than an overblown virus. Make no mistake, the Corona virus is being exploited. As of this writing less than 5,000 people have died from this COVID-19 virus, on a planet populated by 7.6 BILLION. This year's influenza season (flu) is expected to take the lives of some 700,000 people worldwide. 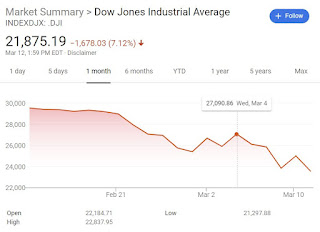 Although Corona virus is more aggressive in its spread and in certain risk categories it is more deadly, it however is not a big enough problem to warrant the market response we see here. It has become political in nature and that has created as much a problem as the actual virus itself.

It is important to remember that the rich billionaires that sold early in the market slide are sitting on massive piles of cash. These guys sold off $6.5 trillion last week, this week all of the small investors were in a panic and sold off their positions making matters even worse for them and BETTER for the rich guys. The billionaires will come back into the market after the dust settles and buy back their positions for 60 to 70 cents on the dollar. They will make all the money back again plus a tidy bit extra. Right now about $10 TRILLION in stock market cash has exited the Wall Street equities market and now is circulating in other markets.

What is important is that there is idle cash in the marketplace right now. The billionaires don't like idle cash. Even if the super rich start buying back stocks soon, they will ultimately have surplus cash and some of that cash will likely find its way into the economy via lending, capital investment, and venture capital. Much of this will drive real estate projects that often need large chunks of up front cash to get started.

Treasuries are not yielding much at the moment so investors will look to bonds, mortgages, and other real estate funding for better returns over the long haul. Again the investors will come back to the stock market after the panic subsides and when that happens some of this potential cash for real estate development will go away. Developers should be jumping on this opportunity for financing NOW!

In the current marketplace we still see strong employment, rising wages, low mortgage interest rates, and healthy investment in real estate. The housing market still looks pretty rosy for the rest of our spring season. I am seeing a tightening in inventory and more aggressive offers from buyers and that is also an indicator at least for the short term that conditions in housing are solid.
Posted by Rod Sager at 8:30 AM