Rates up a FULL point over last year.

The all time record low rates of this past spring are now in the history books. We have seen them creep up by a full point over the last few months. But it is important to understand that historically speaking any rate under 6% is a good rate. That said 4.5% is a GREAT rate. If this upward trend continues however, this extended period of extra buying opportunity will finally come to a close.

Higher rates will eliminate some people from the dream of owning a home. For others it will limit the size, type or neighborhood of their next home. Yet there are still buyers out there waiting. Waiting for what? Even higher rates, bigger payments or worse another decade of renting?

Over the last thirty years rates have averaged much higher than today's rates in the mid 4s. The chart below shows the average mortgage rate on a 30 year fixed loan since 1975. Our current rates are still the best in over forty years. 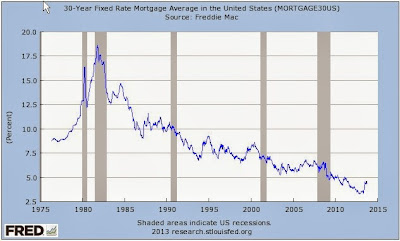 The last three years have truly been a golden era for buyers in the American home market. Prices have been low as we recover from the "crash" of 2008-2009. Rates have been at or very near ALL TIME record lows for the last two years. This golden era has already lasted twice as long as I expected it to and something will have to give. Either rates will spike, prices will spike or a little of both. The bottom line remains that this is a great opportunity to take advantage of a rare combination of low rates and low prices. First time home buyers can get into a well priced home with payments lower than rent.

If an entry level homeowner has some equity, they can sell their small house and move up to a big house while prices are still low and rates are low. I think many home owners sitting on a house they bought in 2005-2007 are waiting for values to rise. Some have to, because they need equity. Others are sitting on equity and are waiting for a better price. The problem with the latter is that it may be seriously flawed logic. If prices rise 10% over the next year they will get an extra $15,000 for their current $150k home. But that move up larger house currently listed at $250k will likely rise $25,000. So in essence they are stepping over the proverbial quarter to pick up that proverbial dime. And as they wait, they run the risk of also having a higher interest rate next year on that new larger and more expensive home. If that happens they could spend tens of thousands of dollars in additional interest over the life of the new loan.

The empty nester looking to downsize can still take advantage of these low rates now. Even if they get a little less cash out of their larger home now, they may save tens of thousands in interest on that final home for retirement with our current low rates. I cannot over estimate this old saying, "You will feel the sting of high interest long after the joy of a low price has faded away." Conversely, you will enjoy the benefit of low interest, long after the sting of a high price has faded away. Price is fleeting, interest is forever, well at my age it is forever anyway.

Based on the chart above, some of us may not even be alive next time we have rates in the threes. These current mortgage rates are being suppressed by the federal government's willingness to buy the mortgages at the low rate. They are doing this to prop up the real estate market while the economy recovers. Once the fed backs away from that policy, and they will, rates will likely return to a more "normal" 6-7%.

This is a pivotal moment in the real estate for anyone considering a purchase, a sale or both. How many times have you looked back in life and said, "If I only had done this, or that..." You know, like buying Apple stock when it was five bucks a share in the mid 90s. Now is one of those times in real estate but the bottom has been revealed and things appear to be moving up. As I said in my book, 'Don't Panic', "Buy low and sell high, and that is right now, my friends."